The importance of people-centred design – “Design that makes a difference”

Last week I* went to the “Design that makes a difference: people centred projects from Norway and the UK” exhibition at the Royal College of Arts on Kensington Road in London which celebrates good examples of “people-centred design thinking”.

The exhibition was a joint venture between the Helen Hamlyn Design Centre (housed at the RCA) and the Norwegian Design Council and showcases design talent from the UK and Norway, with projects being nominated for inclusion. Here’s the exhibition catalogue (PDF).

As you might expect the exhibition was simply and clearly laid out. Some of the projects were rather large scale and couldn’t have fitted into the room (eg making large touristy areas around London’s Southbank more accessible and welcoming) so the curators sensibly used photographs, along with models or other examples for the smaller scale projects.

Working on CHI+MED (which is about making medical devices safer) I was particularly interested in the ‘Redesigning the ambulance’ project on changing the insides of ambulances to make better use of the space (and making it easier to keep hygienic) as well as making it easier for ambulance crews to get information quickly about their patient. 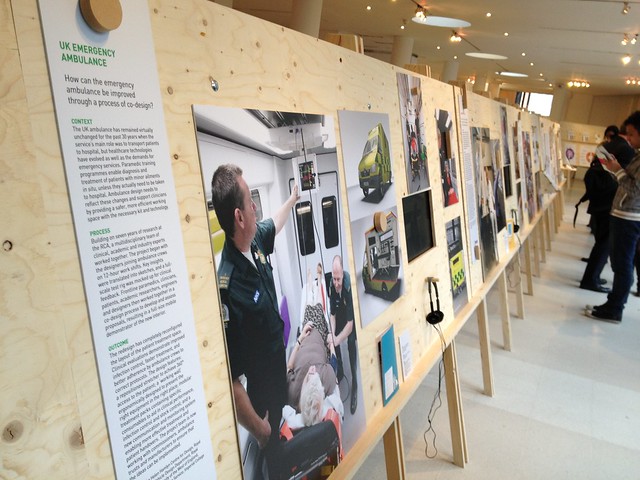 The projects, including Redesigning the ambulance, included an overt element of anthropology – studying the people who were going about their task, and how they were going about it, in other words ‘people-centred design’.

“In order to understand the complexity of the ambulance service, research began with an immersive study that involved joining ambulance crews on several 12-hour shifts, riding in the vehicle on callouts and observing and documenting everything that happened. This gave the opportunity to interview ambulance crews, healthcare providers and patients in situ and observe issues firsthand.”

CHI+MED also uses ‘situated research’ (where investigators visit the place(s) in which the tasks occur, in a real-world setting) as part of our work in order to understand more about how medical devices are used in practice, eg finding out how  how people on dialysis at home user their machines1 and how nurses use programmable infusion pumps2.

Here’s an example of a magazine article, written for school children as part of the cs4fn (Computer Science 4 Fun) public engagement programme, which explains how Baxter Healthcare used anthropology to understand more about the way in which their infusion devices were really being used, in practice. They are using this information to understand their customers better and to design better devices.

“Nurses in the mist” – cs4fn article on how anthropology is being used in medical device design.