Habit-forming: don’t forget to take your pills, and how do you remember them?

Update – now with added video, see below (at end) 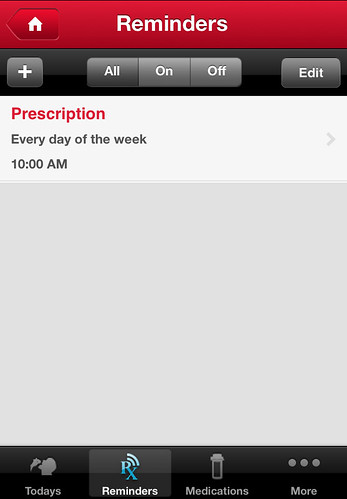 An example of a smartphone pill reminder app, from Krystal B on Flickr

Katarzyna Stawarz, a PhD student from UCLIC (UCL Interaction Centre), has been investigating the way in which smartphone apps can help people to form habits that help them remember to take their medication.

She gave a talk last week at Health Informatics Scotland (in Edinburgh) at the “eHealth, medication management and implications for health and social care integration” event on 22 August 2014. Below are some of the tweets that Maria Wolters shared about her talk.

Katarzyna’s particularly interested in people who are taking preventive medicine, such as the contraceptive pill – a situation where “remembering is often more difficult, because they don’t have symptoms, don’t have to change their whole life, and they don’t self-identify with the illness (because there’s no illness!)” – how do those people remember?

.@falkowata – very easy to forget contraceptive pill, but such failures of prospective memory result in about 1 mil pregnancies in US

.@falkowata if we harness regular prompts to cue behaviours, such as medication taking, that can help people remember to prevent

.@falkowata makes a distinction between learning not to forget versus learning to rely on an external reminder

.@falkowata self tracking helps form habits, but as soon as self tracking stops, which could be when your app breaks, you start to forget

1 Response to Habit-forming: don’t forget to take your pills, and how do you remember them?